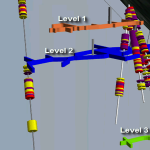 The Property is located on east of Slocan Lake approximately 7.0 km south of the village of Silverton, in the Slocan Mining Division of southeastern British Columbia.

In October 2012, International Bethlehem Mining Corp completed a 246 metre drill hole in the Ridge Zone, approximately twinning Noranda Hole LH88-23 which reported an intersection of 10.78m grading 4.38g/t Au. The 2012 drilling was completely helicopter supported; using an Aérospatiale Lama helicopter to fly the drill and build the drill pads on the side of the mountain.

Until 1987, all work on the LH Property focussed on exploring for extensions to the narrow, high grade mesothermal quartz vein hosted gold mineralization. Although these programs met with some success, the work did not develop any significant targets.   In 1987, surface prospecting and soil geochemistry by Noranda Mines located the Ridge Zone which they tested by 8 drill holes. Drilling in 2012 by International Bethlehem Mining Corp., confirmed the presence of the Ridge Zone mineralization. The mineralized Ridge Zone is now the target for further exploration.